An earthworm is a terrestrial invertebrate that belongs to the phylum Annelida. They exhibit a tube-within-a-tube body plan, are externally segmented with corresponding internal segmentation, and usually have setae on all segments.They occur worldwide where soil, water, and temperature allow. Earthworms are commonly found in soil, eating a wide variety of organic matter.This organic matter includes plant matter, living protozoa, rotifers, nematodes, bacteria, fungi, and other microorganisms. 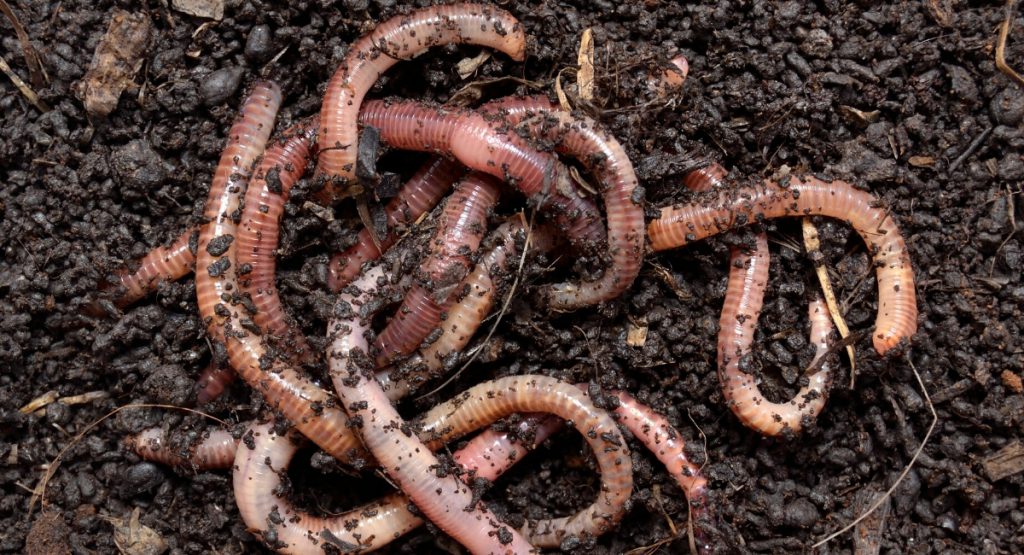 From front to back, the basic shape of the earthworm is a cylindrical tube-in-a-tube, divided into a series of segments (called metamerisms) that compartmentalize the body. Furrows are generally externally visible on the body demarking the segments; dorsal pores and nephridiopores exude a fluid that moistens and protects the worm's surface, allowing it to breathe. Except for the mouth and anal segments, each segment carries bristlelike hairs called lateral setae used to anchor parts of the body during movement;[12] species may have four pairs of setae on each segment or more than eight sometimes forming a complete circle of setae per segment.[11] Special ventral setae are used to anchor mating earthworms by their penetration into the bodies of their mates.

Generally, within a species, the number of segments found is consistent across specimens, and individuals are born with the number of segments they will have throughout their lives. The first body segment (segment number 1) features both the earthworm's mouth and, overhanging the mouth, a fleshy lobe called the prostomium, which seals the entrance when the worm is at rest, but is also used to feel and chemically sense the worm's surroundings. Some species of earthworm can even use the prehensile prostomium to grab and drag items such as grasses and leaves into their burrow.

Food enters at the mouth. The pharynx acts as a suction pump; its muscular walls draw in food. In the pharynx, the pharyngeal glands secrete mucus. Food moves into the esophagus, where calcium (from the blood and ingested from previous meals) is pumped in to maintain proper blood calcium levels in the blood and food pH. From there the food passes into the crop and gizzard. In the gizzard, strong muscular contractions grind the food with the help of mineral particles ingested along with the food. Once through the gizzard, food continues through the intestine for digestion. The intestine secretes pepsin to digest proteins, amylase to digest polysaccharides, cellulase to digest cellulose, and lipase to digest fats. Earthworms use, in addition to the digestive proteins, a class of surface active compounds called drilodefensins, which help digest plant material. Instead of being coiled like a mammalian intestine, in an earthworm's intestine a large mid-dorsal, tongue-like fold is present, called typhlosole which increases surface area to increase nutrient absorption by having many folds running along its length. The intestine has its own pair of muscle layers like the body, but in reverse order—an inner circular layer within an outer longitudinal layer.