Azolla (Azolla sp.) is an aquatic fern consisting of a short, branched, floating stem, bearing roots which hang down in the water. The leaves are alternately arranged, each consisting of a thick aerial dorsal lobe containing green chlorophyll and a slightly larger thin, colourless, floating ventral lobe. Under some conditions, an anthocyanin pigment gives the fern a reddish-brown colour. 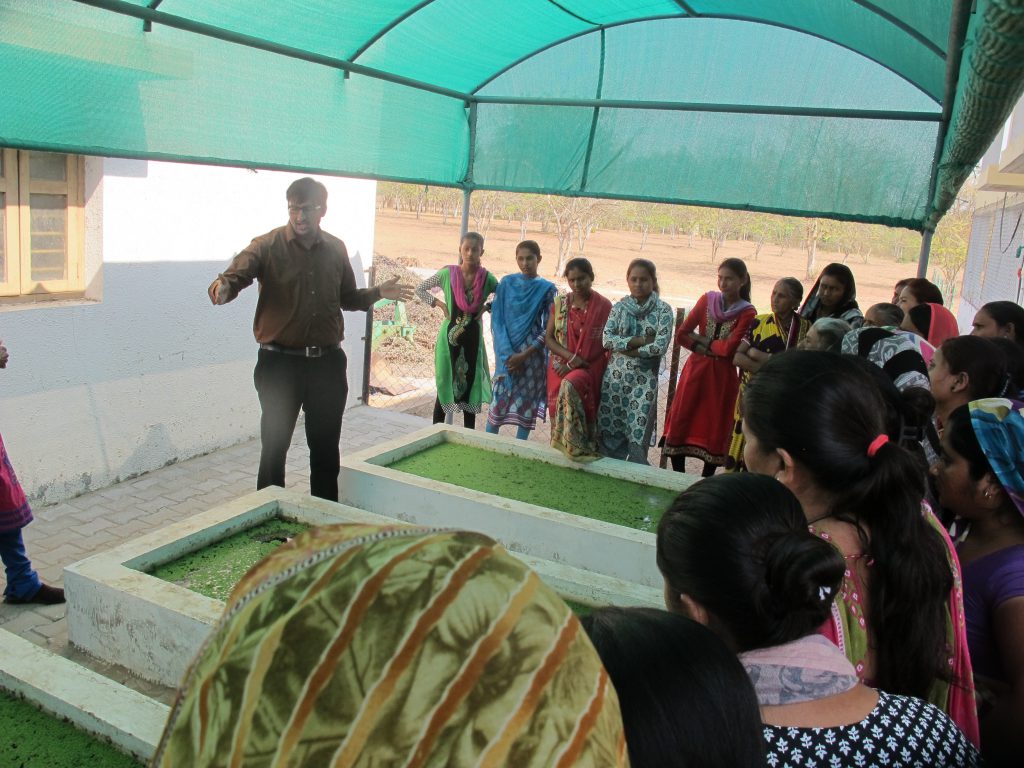 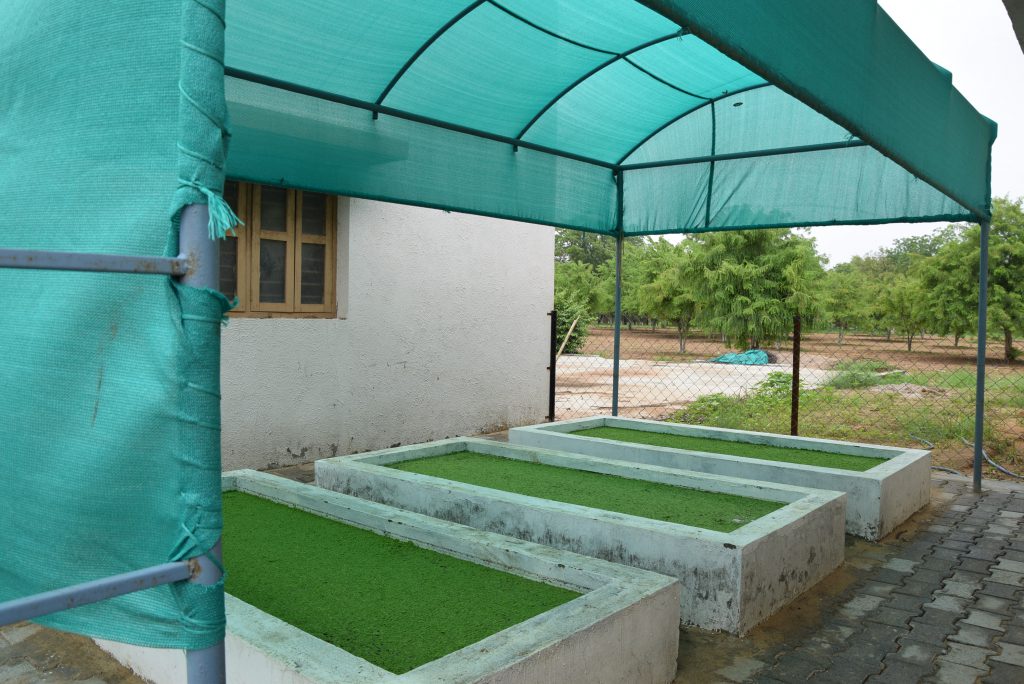 Azolla (Azolla sp.) is an aquatic fern consisting of a short, branched, floating stem, bearing roots which hang down in the water. The leaves are alternately arranged, each consisting of a thick aerial dorsal lobe containing green chlorophyll and a slightly larger thin, colourless, floating ventral lobe. Under some conditions, an anthocyanin pigment gives the fern a reddish-brown colour. Plant diameter ranges from 1-2.5 cm for small species such as Azolla pinnata, to 15 cm or more for Azolla nilotica. Azolla plants are triangular or polygonal in shape, and float on the surface of the water, individually or in mats. They give the appearance of a dark green to reddish carpet, except Azolla nilotica that does not produce the red anthocyanin pigment. The most remarkable characteristic of azolla is its symbiotic relationship with the nitrogen-fixing blue-green alga (cyanobacterium) Anabaena azollae. The fern provides nutrients and a protective cavity in each leaf to Anabaena colonies in exchange for fixed atmospheric nitrogen and possibly other growth-promoting substances (Lumpkin et al., 1980).

Azolla has a historical role in agriculture. For centuries, it has been recognized as a useful plant in Southern China and Northern Vietnam, where it has been used as a biofertilizer and green manure for the rice crop due to its N-fixing abilities (Van Hove et al., 1996). Azolla was also mentioned as a poultry feed in Peru in the 18th century (Feuillée, 1725). Azolla production was heavily promoted in the early 1960s in China and Vietnam, resulting in a rapid expansion in these countries. It attracted international attention in the 1970s as a result of the oil crisis and the rising prices of fossil fuel-dependent N fertilizers. Azolla became a potential replacement for these as it was believed that it could bolster rice production in many tropical countries. However, enthusiasm for azolla faded in the 1980s and was followed by a period of scepticism. Azolla production in China and Vietnam declined (perhaps due to the increasing use of land for food production) and azolla development worldwide did not live up to initial expectations, due to serious constraints such as water availability, difficulties in maintenance and handling, high labour requirements and limited knowledge on the specific needs of each azolla species (Van Hove et al., 1996). For instance, adoption of azolla as a livestock feed failed in the Philippines (APO, 1990). It should be noted that azolla is often considered by farmers as a noxious weed, so perception of azolla is not always positive (Lumpkin et al., 1980).

Azolla can be fed to livestock either in a fresh or dried form. It can be given directly or mixed with concentrates to cattle, poultry, sheep, goats, pigs and rabbits. It takes a few days for the animals to get used to the taste of azolla, therefore it is better to feed it with the concentrates in the initial stages. When dung is used as fertilizer in backyard azolla ponds, the azolla should be washed thoroughly with fresh water to remove the smell of the dung (Giridhar et al., 2013).

As fresh azolla is highly perishable, it is advisable to dry it immediately when there is a surplus, or for livestock species for whom a dried form is more practical or preferable. Azolla is usually dried in the shade and stored dry, for example in a plastic bin, for later use (Giridhar et al., 2013).

Azolla occurs in ponds, ditches and rice fields of warm-temperate and tropical regions throughout the world. Each species has a specific native range: Azolla caroliniana, Eastern North America and the Caribbean; Azolla filiculoides, Southern South America through Western North America including Alaska; Azolla microphylla, tropical and subtropical America; Azolla mexicana, Northern South America through Western North America; Azolla nilotica, upper reaches of the Nile to Sudan; Azolla pinnata, most of Asia and the coast of tropical Africa. These species have been dispersed by man and can be found outside their native regions (Lumpkin et al., 1980).

Water is the fundamental requirement for the growth and multiplication of Azolla as the plant is extremely sensitive to lack of water. Although Azolla can grow on wet mud surfaces or wet pit litters, it prefers a free-floating state. Azolla can survive within a pH range of 3.5 to 10, but optimum growth is observed in the range of 4.5 to 7. Optimum temperature for growth and nitrogen fixation depend on the species. It is usually in the 20-30°C range, though Azolla mexicana is more tolerant of temperatures over 30°C. Outside this range, growth decreases until the plant begins to die at temperatures below 5°C and above 45°C. Azolla filiculoides can withstand temperatures as low as -5°C without apparent harm. Saline tolerance depends on the species. The growth rate of Azolla pinnata was found to decline as salinity increased above 380 mg/l. At about 1.3% salt (33% of sea water) the growth of Azolla caroliniana ceased and higher concentrations resulted in death. Azolla filiculoides has been reported to be most salt-tolerant. During periods of stress, anthocyanin is thought to protect the photosynthetic apparatus from damaging high light intensities by absorbing some of the light and converting it to heat. For that reason, azolla often exhibits a red colour under field conditions, especially where phosphorus is deficient. Azolla grows best in full to partial shade (25-50% of full sunlight). Growth decreases quickly under heavy shade (lower than 1500 lux) and more than 50% of full sunlight reduces photosynthesis. The optimum relative humidity for azolla growth is between 85 and 90%. Azolla becomes dry and fragile at a relative humidity lower than 60% (Hasan et al., 2009; Lumpkin et al., 1980). Successful cultivation of azolla requires the application of a certain amount of phosphorus fertilizer (0.5 to 1.0 kg P/ha/week), but this does not necessarily mean an increase in the amount of phosphorus fertilizer required to produce a crop of rice (Lumpkin et al., 1985).